When confronted with something or someone unfamiliar to us, we humans may have a variety of reactions. Some of us run the opposite way as fast as we can, probably out of fear or ingrained survival instincts. Others of us run toward the unknown to learn more or get a better look. Perhaps this is a built-in curiosity and eagerness to learn. Or it may be due to an undeveloped or blunted sense of danger. Some of us stand or sit and simply observe. We take in the visual, the auditory, the sensual. We process and react in small increments. Persons watching us may not know which set of reactions is going to turn out to be the best in the long run.

Imagine you are living in the late 1970’s and into the 1980’s while working in a hospital laboratory and also beginning medical school and residency. During this time, you may remember hearing about an unusual disease which at first was thought to only “affect homosexuals, heroin users, hemophiliacs and Haitians.” It seemed to cause swollen lymph nodes and make them susceptible to unusual infections, such as Pneumocystis, Mycobacterium avium, and Cryptosporidium. It also seemed to cause rare cancers such as Kaposi’s sarcoma and aggressive lymphomas—in young persons!

Many of us were fearful. We were told this was an infection. One that was caused by a virus and was highly contagious. So, we suddenly began wearing gloves while caring for patients. We stopped eating our lunches in the laboratory’s work areas. Many persons also developed biases, especially, against hemophiliacs and gay persons. We did not know if this infection could be transmitted just by touching or kissing, or if it was transmitted only by sexual contact. At this time fear, hatred and stigmatization of gay persons had increased in our society. But we soon saw infections occur in recipients of blood containing this virus and in infants born of women with the virus. How could this be!

By now you are correct if assuming I am referring to human T-lymphotropic virus III, also once known as lymphadenopathy-associated virus and now known as Human Immunodeficiency Virus (HIV). Over time, with many, many, many studies, we have learned a lot about HIV. It turns out merely being gay or a hemophiliac or using drugs does not make us positive for HIV! In reality, the risk of getting HIV was all about behaviors and actions, such as sharing/not sharing intravenous needles, having/not having unprotected sex, being exposed/not being exposed to blood-containing body fluids, etc. How wrong we were about so many aspects of HIV!

Skip ahead to 2020. We hear “virus” until we are either mortified, numb or exhausted from the effort to process what we are hearing, seeing and sensing. Thirty years from now, what beliefs about COVID-19 will still hold up scientifically? Which ones will have been way off the mark? What additional biases and stereotypes that result in human damage will we struggle to counteract? Could it depend on whether we choose to look through a high-powered lens and see only a miniscule field of vision clearly, but miss the broader view? Perhaps using a low-level objective with a wide field of vision is better right now, even if we cannot discern the fine details of what we are seeing? I certainly do not know the answers to these questions. But so far, I have been devoting most of my efforts to observing, absorbing and listening, while not shrinking in fear, not being dangerously cavalier, but always learning as I go.

I encourage you to observe, listen and take inventory of where you are today, into next year and even thirty years from now. 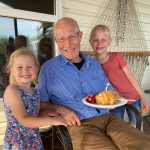 Robin's greatest joys and privileges are two curious granddaughters, two adult children and their spouses, one long term (41 years) spouse, and helping navigate dementia with his parents. For fun, he enjoys solving electrical, plumbing, and appliance conundrums for friends, neighbors and family. A bonus is riding bike or hiking in National Parks with Deb.