Sometimes I feel trapped, concerned, frustrated and angry about the state of our country’s woefully inadequate response to the massive threat of climate change to our peace, our livelihoods, the beauty that comes with a diverse biosphere and our kids’ – my kids’ – future.   We have the tools we need to meet this challenge many times over; we just lack the collective will.  I care about many issues, but this one probably keeps me up at night the most.  So, I find I need an outlet for all this pent-up negative energy, and I think that is what first made me think about solar at FMC.

The Creation Care Crew (CCC) met for its first meeting in the spring of 2019.  Marie Harnish, John Marquis, Randy and Ellen Stoesz, Rhonda Talbott, and Bob and Emilie Walson and I came together because we all care about creation care and how our church interacts with this issue.  We first focused our efforts on making recycling easier at church, in addition to reviewing a lot of great creation care work that had already been done at FMC.  But even at our first meeting we discussed the idea of going solar.

When I first raised the possibility of solar, I have to say, I didn’t think it would go anywhere.  I thought it would be too expensive; there was too much else going on… it just seemed too big.  But why not dream?  Members of the Creation Care Crew wanted to explore it.

So, we did. John Marquis sought out quotes from different solar installers, and we held several meetings to learn more about other congregations’ efforts with solar.  We explored funding, and learned a lot about the technicalities and benefits related to solar.  After this research, and creating numerous opportunities to share information and get feedback from the congregation, we made the decision to move forward and test the waters with fundraising.

The response we received was tremendous.  First, all of the members of the CCC pledged contributions that were significant to their own circumstances. Then we began approaching folks within the congregation.  Again, when we started, I didn’t think it was likely that we would be able to raise the full amount to install solar, but as pledge after pledge came in, at levels that clearly showed strong support for funding this project, it gradually became apparent that we were going to reach our goal of nearly $100,000 in pledges.  This fundraising period lasted only about five months.  I remain amazed at the level of support we received and how quickly the funds were received!

The Creation Care Crew collectively care a lot about the issue of climate change, and we turned that caring into leadership and action.  It was by sharing our energy through this leadership that we tapped into the care that others held for this issue as well.  Then we shared in the effort to raise the resources needed to make what started as a dream a reality.

The panels aren’t on the roof yet, as the permitting process has been slowed due to Covid-19.  But we are well on our way, and we look forward to sharing in a celebration of converting to clean, renewable solar power at First Mennonite Church in the near future. 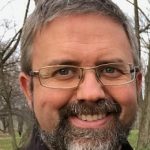 Sam Carpenter shares, “Lately, I have spent time working with my kids on virtual learning, volunteering related to the election, working on solar for FMC, consulting, and playing music and tennis. Our family remains mostly huddled up at home during the pandemic, with a few extra movie nights and the occasional outdoor get-together with friends.”

Comments are closed, but trackbacks and pingbacks are open.