On August 23, 2021, the Dagne Assefa Park was dedicated on the grounds of Shalom Mennonite Church.  Despite Dagne’s inability to walk or talk on that occasion, he still had his smile and the twinkle in his eyes.  It was most appropriate, at the penultimate gathering in his honor, that a diverse group was there to celebrate.  Dagne’s greatest gift was to bring people together and make them all feel welcome.

Frank Kandel described Dagne as “the Gentle Shepherd of the flock, always cognizant of the needs of each person in the flock.  He was there for each one of us.  He had a presence, eye contact, smile, handshake that you knew was for real.  If one of us had a crisis or a sudden need, that always took priority over his planned agenda.  Numerous times, when some of us wanted to barge ahead with this plan or that, Dagne exercised caution, wanting to make sure all voices were heard, wanting to make sure we could embrace the plan as one flock.”

Before Dagne left Ethiopia to study in the US, he was an activist in the church and marketplace, not nearly so patient.  He fully expected to return to his homeland after gaining advanced degrees.  The political situation in Ethiopia prohibited him from doing that.  For many years, Dagne held on to the dream of returning in his retirement to teach at Meserete Kristos College.

Dagne wedded Carol Weaver in August 1985 and became a father to Lydette in 1986 and Menan in 1989.  Dagne danced at their weddings as Tyler Falk and Isaac Lederach were welcomed as sons.  He was delighted to hold his granddaughter, Yeshi, and was anticipating the birth of another granddaughter.

Dagne had a diverse personal library in both English and Amharic.  He experienced racial discrimination in his work before taking pastoral leadership at Shalom.  Early in his ministry at Shalom, some of his sermons could be somewhat dry and academic.  Gradually, as he allowed his storytelling abilities to shine, Dagne was able to communicate his passion for justice.

Dagne was a mentor to many.  Formally, at Shalom and at CTS, he took his role seriously.  Long after participants had left the programs, Dagne was still checking in with them.  One did not need to be assigned to him to have Dagne take an interest.  His guidance was sought – and received – by countless others.

Dagne persisted in following through with many people.  That tenacity was sometimes less welcome in other aspects of life.  This past summer, as walking was becoming more difficult for him, we thought him downright stubborn to insist on a long trek on the Pennsy Trail— but we did it anyway!

Dagne was a friend to all.  It was his insistence on caring for others that remains with us–as a treasured memory and a challenge to follow his example. 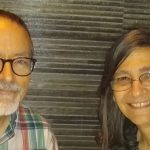 Sam and Carol moved to Indianapolis over 30 years ago, attracted to the ministries of First Mennonite Church. They have been part of Shalom Mennonite since 1996. In retirement they enjoy living downtown and walking everywhere except to church!