This issue of Menno Expressions explores the concept of service and acknowledges the 100th Anniversary of Mennonite Central Committee (MCC) taking place in 2020. MCC was founded in September of 1920 to provide food and assistance to people affected by war in southern Russia which is now the Ukraine. (To learn more about its inception, watch the YouTube video Tractors for Ukraine. )

In the summer of 2018, I went to Ukraine on a Mennonite Heritage boat tour with my daughter and my parents. We visited the villages of our ancestors and the train station where their journey to the United States would have begun. We shared the experience with others who were also tracing their roots. While my family immigrated to the United States in the first migration from the Ukraine in the 1800s, there were some families that did not flee Ukraine until the second World War. We heard many first-hand accounts from the other travelers of how MCC had kept their families alive with the relief they provided and also stories of how upon arriving in the U.S. and Canada, they donated their few resources to MCC to help those left behind. With immigration a part of our national agenda today, I’m reminded that immigration is part of the Mennonite story of service as well.

For me, service has been a concept that I have not given much thought to the “why” we are called to serve. As I reflect on service, it has been a substantial part of my identity personally and professionally. My great-grandmother was a missionary doctor in India who treated leprosy, my paternal grandfather continued her work running the leprosy mission in the Madhya Pradesh region of India and my parents were missionaries to West Africa where I lived until age 10. I attended a small liberal arts college where “Culture for Service” is the motto and spent a semester in Costa Rica in the 1980s (before it was a tourist destination) studying the language and working in a Cooperative. My career has been in the Human Service field working with terminally-ill patients and their families, and in behavioral health settings as a counselor. I don’t think of my day-to-day responsibilities as ways of providing service to my community or think about how I might incorporate more service opportunities into my life. Maybe that’s because service has been an expectation, or part of my ethnic and cultural identity as a Mennonite, or as my professional role or what I witnessed the role models in my life doing. This 100th anniversary of MCC is challenging me to find ways I can be more intentional about the purpose of my service and to view service as an act of love.

Service does not have to be the larger acts of traveling to a foreign land for a development project or a medical mission. It might be through simple, daily actions and commitments that we make the most difference in the lives of others. I’m not one for New Year’s resolutions but I’ve been thinking about a practice my sister’s family does each year of adopting a word for the year and finding ways to live that out throughout the year.  As a way to honor the anniversary of MCC and be more intentional in my life about the role and act of service, “Service” might become my word for 2020.

In my role as a counselor, I sometimes use the work of pastor Dr. Gary Chapman and his book “The 5 Love Languages: The Secret to Love That Lasts.” One of the love languages he identifies is Acts of Service which is love we demonstrate by doing tasks for our partner that you know they would like you to do. Some examples could be filling up the car with gas, doing the laundry or bringing them a cup of coffee. Perhaps this is a way as well to be more purposeful at incorporating service into our lives through simple acts and not just in our personal lives.

I recognize that service can be complicated by our motivations and judgements and it does at times run the risk of creating dependency. Our human nature requires us to address these questions but in its purist form, service = love. Just as Jesus performed the simple, non-judgmental tasks of foot washing, acts of service are an opportunity for us to reach out in love to a stranger, an immigrant, a neighbor, a child, and a community without judgement, or the expectation of reward or monetary gain. 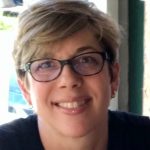 I’m a wife, mother and social worker by training. I enjoy traveling, the beach, walking my dog on the Monon Trail and college football.