MennoExpressions has been reflecting the thoughts of Indy’s Mennonite community for 32 years, hearing from those who have connections to either First Mennonite Church or Shalom Mennonite.  We’ve been fortunate to have wonderful editors in that time.

Founder, Erv Boschmann, started us off, and Shari Wagner took over once he took a step back.  After Shari’s tenure we had Robin Jones, Dean Habegger and then, most recently, Alison Schumacher.  Grace Rhine and Howard Palmatier stepped in for several short terms to tide us over.

Each Editor brought unique flavor to the process, which allowed us to explore new ideas and consider changing technologies.  The dedication of all our editors has kept many of us on the creative board year after year.

The board meets 3-4 times a year for about 90 minutes.  A lot of brainstorming and idea generation bounces off the walls until we are able to mold what we’ve verbally thrown out in the space into themes that speak to us; themes that we believe would carry meaning for all of you.  Then we talk about sources…potential writers… asking: Who would have an experience that might fit into this theme? Whose voice have we been missing in past issues? What artwork would express the ideas we are discussing?

It’s invigorating as an issue of MennoExpressions begins to take shape.

This issue features the theme of Gleaning and Gathering.  The concepts fit in with FMC’s study of Ruth as well as the notion of gaining insight to the way we work and function.  It focuses on First Mennonite’s present transition process – something Shalom did a short while back.

Over time we’ve delved into difficult subject matter as well as the lighter side.  We’ve been open to new ideas. We’ve asked for feedback and heard both negative and positive responses.  Looking back on the issues over the years, we see a history of Mennonites in Indianapolis since 1987. We aren’t ready to pack up and leave Menno Expressions behind just yet.

This issue is being published without a named editor. We are still looking for someone who would have an interest in filling that slot and are open to creative ways to make that happen.  It’s hard to fill the shoes of Alison Schumacher, we know, but if you are so led, please talk to us. Chat with a board member or ask Alison, Shari or Erv about their experiences. Perhaps this is the time for one of you to Glean and Gather in a new opportunity. 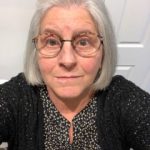 Mary is a retired nurse and educator who divides her time amongst grandchildren from Bavaria, Germany to Chicago, to Oakland, Ca.  She has been on the MennoExpressions board since 1987 when she was considerably younger and smaller, and remembers one of our first meetings where we brainstormed while lolling in Erv and Priscilla Boschmann’s hot tub.