After spotting the late-July request from Family Promise of Greater Indianapolis (FPGI) about the need for more congregations to support their new Apartment Shelter Project, I knew I wanted to engage with this ministry.  FPGI does a phenomenal job of supporting and sheltering families as they transition from homelessness to finding a permanent home. Then, as part of the After-Care program, case managers journey beside the families for up to two years to help sustain their housing.

Like everyone else, Family Promise has been greatly affected by the global pandemic and had to pivot quickly from coordinating shelter at hosting congregations to placing families in apartments that the nonprofit leases.  After housing families temporarily in hotels in the spring of 2020, FPGI began the mammoth task of locating and setting up eight to ten apartments for families in their shelter program.  In July, due to the concerning effects of the pandemic, the City of Indianapolis awarded Family Promise a major grant to lease ten additional apartments in order to help ten more families.  What an exciting blessing!  At the same time, it required FPGI to depend even more on volunteers and additional staff to make that happen.

As First Mennonite Church has been a host congregation for over 25 years, I was trusting our congregation would join me in supporting this Apartment Shelter Project.  And since my own family has served this organization in many behind-the-scene ways over the years, I was hoping they would be willing to volunteer to move donations and set up an apartment. Neither my church family nor my individual family disappointed me!  My son Jonah said later about the experience, “It felt good to help, because everyone deserves a place to live.”

Due to coronavirus concerns, and with FMC leadership’s approval, I created a protocol plan so our congregation could donate and drop off needed items safely at our church building.  Mike Chapuran, FPGI Executive Director, quickly placed First Mennonite Church on a furnishings team with two other congregations (The Promise United Methodist Church and St. Elizabeth Seton Catholic Church).  He provided a long list of housewares and supplies needed to outfit a two-bedroom apartment and sent a Signup Genius (SG) structure that we customized for our furnishings team.  The list of supplies included typical needs like sheets, blankets, towels, and pots & pans.  But it also included items that people may not think about a family needing like wastebaskets, toilet bowl brush & plunger, first aid kit, extension cord, closet organizers, a pack n’ play and basic tool kit.  (Through Mike’s efforts, Mustard Seed of Central Indiana partnered with FPGI to provide basic furniture for each apartment.)

The furnishings team coordinators then advertised the need with the signup link to our three congregations simultaneously.  We were all astounded and excited when within only five days of publishing the link, various members of our congregations had volunteered to provide almost all of the 220-plus items.  During late August and early September, FMC scheduled three drop-off time periods; plus a few folks dropped off items at my house.  I so appreciated how Alicia Amazan, Deb Helmuth and Melanie Schmucker, our FMC hosting coordinators, volunteered to assist in collecting donations.  (One of the side benefits of organizing this project was that I could see many FMC faces in person!)

The furnishing team coordinated with Mike Chapuran to arrange dates for apartments to be leased and ready for supplies.  Our set-up day was scheduled for Saturday, Sept. 19.  Relying on the strength and energy of my husband and sons, our family filled up our minivan with FMC donations stored at the church and headed for the apartment located at Carriage House East (near 42nd and Mitthoeffer Rd). An FPGI staff member unlocked the apartment and answered our questions.  Since the apartment was on the second floor, my three guys walked up and down the stairs many times delivering items.  When the other two congregations arrived, Kevin, Isaiah, and Jonah helped their volunteers bring in their donations too.  Due to the coronavirus, everyone involved that day wore masks the entire time and attempted to social distance as much as possible.

Several of us worked at setting up the apartment by unpacking items, putting things away, washing all the new dishes and kitchen supplies, making beds, constructing the closet organizers, setting up the TV, putting together a high chair, a booster seat and a stroller, and hanging the shower curtain.  My guys were also kept busy unwrapping packaging from new items, breaking down and carrying cardboard boxes to our van for later recycling, moving extra items that were donated to the FPGI van, and taking trash out to the dumpster.  The whole project that day took roughly three and a half hours.  Kevin was glad to help out, saying “It put a smile on my face knowing that kids would be running through the apartment soon and, hopefully, feel safe with their own space.”

When it was all over, we were tired, but satisfied, knowing that two days later, a family in crisis would have a simple, but safe place to stay.  Thank you so much, First Mennonite Church, for your quick and generous response in supporting a family shelter and following our mission statement… “A welcoming faith community committed to making peace, seeking justice and serving as the hands, heart, and voice of Christ.”

Latest news:  FPGI reported on their Facebook page that on Friday, 11/6, they were able to set up apartment shelters #17 and 18.  Their last two apartments (#19 and 20) were scheduled to be set up on 11/8.  It is wonderful to hear about so many congregations and groups in Central Indiana who are working together to fulfill this need for families without shelter. 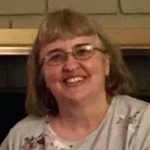 Carmela is not a native Hoosier, but moved to Indianapolis in 1993 and has been an active participant at FMC ever since. Family Promise of Greater Indianapolis is near and dear to her heart as she spent six and a half years working there in a variety of roles including office manager. In October, Carmela celebrated 22 years of marriage with Kevin. She now keeps busy working as a part-time administrative assistant at IU Health North Hospital, parenting her two active teenagers, volunteering on the Faith Formation Commission management team, keeping up with an ageing house, and supporting/visiting her parents who are in an assisted living facility in Orrville, Ohio.