John became a friend soon after I moved with my family to Indianapolis in 1991 so I could attend law school. I met him here at First Mennonite Church. I base this tribute on a wonderful friendship of 30 years.

A lawyer stood up to test Jesus. “Teacher,” he said, “what must I do to inherit eternal life?” Jesus said to him, “What is written in the law. What do you read there?” He answered, “You shall love the Lord your God with all your heart, and with all your soul, and with all your strength, and with all your mind, and your neighbor as yourself.” And Jesus said to him, “You have given the right answer.” The next story following this vignette in Luke is that of the Good Samaritan. I should say first that although the word “lawyer” is used in this translation, legal experts in Jewish society at that time served a different function than lawyers do in our society. But I start the eulogy with that vignette because I think John saw the people in his personal and professional life as neighbors, and he did his best to love them as he loved himself. John once told the story of being asked this question, “How do you maintain a good attitude toward people who come before you in court, given the bad things they are accused of doing?” John replied, “They are God’s children too.”

Is there a kind of naivete in trying to love your neighbor as you love yourself? I believe John had a cup of realism that was just as full as his cup of idealism. I think that he saw the world as it is, filled with many beautiful things, but also as a place where people sometimes do awful things. He seemed to be good at letting go of the bad stuff, and in seeing humor in situations that were silly or absurd.

John was capable of getting angry when he saw that people were abused, and he was committed to protecting people from abuse when he was in a position to do so. He served in a number of professional positions where he was responsible for persons and programs that intervened in the lives of children and families where abuse and/or neglect had occurred. He had a large measure of knowledge and wisdom regarding the psychological and legal issues associated with abuse and neglect. This doesn’t mean that he never made mistakes, because knowledge and wisdom don’t always lead to the right decision or judgment in complicated and messy interpersonal situations. But we as a society would be blessed if all of the persons in such positions had the trained mind and the warm heart that John had.

Another way in which John loved his neighbor was his commitment to change policies and structures, not just individuals. He knew that one can’t be a good neighbor if one lives in a neighborhood where some people are treated differently or even excluded. He stood up for a society with just and equitable social and economic structures.

I would like to sum up with a paragraph from a letter I wrote on John’s behalf in 1995, when he asked Governor Evan Bayh to appoint him to a vacant seat on the Circuit Court bench in LaGrange County, Indiana. The focus of this paragraph is on John’s professional life, but it describes his personal life as well.

“John would be an excellent judge because of his strong commitment and idealism regarding social and economic justice. He has attempted to live out this commitment as a lawyer for Legal Services Organization of Indiana, Inc., where he has worked since graduating from law school. His willingness to work in a position which is demanding but pays only a modest salary demonstrates that his values and beliefs are more than just words. What John believes is such an integral part of his life that he practices it wherever he goes and whatever he does. This means that John has a great deal of integrity, honesty and straightforwardness. John will not say one thing, and then proceed immediately to practice or implement something completely different. His approach may not always be politically expedient, but it is refreshing to see someone live in a manner which shows greater concern for integrity than for what he can get for himself. With the public’s cynicism today regarding lawyers and public officials, John is the kind of person who would do his small part as a judge to build confidence in the idea that public officials are truly servants of the people. This value is sometimes given lip service by those in public life, but John is a person who would give it real meaning and substance.”

John was appointed by Governor Bayh to the position as judge of Circuit Court in LaGrange County.

It is with great sadness and a tremendous sense of loss that I must say “Goodbye” to my good friend, John Boyce. He fulfilled the law to love his neighbor as he loved himself. The neighborhood has lost a kind and a thoroughly decent man.

Shared by Paul at First Mennonite Church on September 17, 2022 during the memorial service for John. 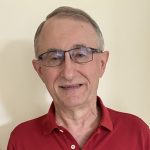 I am retired and enjoy reading, watching sports, traveling to see family, walking for exercise, and staying informed on current events.