In January 1991 (as the Gulf War had just started), I spent four months volunteering at the Leprosy Colony KM 81 in Paraguay. My great grandparents had volunteered there in the early 1950s. I had just graduated from Goshen College with a Biology degree, and had worked short term jobs in landscaping and in a laboratory. I was still figuring out next steps toward a career. Through family and friend connections, my friend Maria and I embarked on a four month service term in Paraguay. I volunteered at the Leprosy Colony which was 81 kilometers from the capital city (hence the name KM 81). Maria volunteered in a daycare (“Guardaria”) in Asuncion.

The Leprosy Colony is a compound staffed by volunteer doctors, nurses, pharmacists, a physical therapist, prosthetist and others. Local people travel hours for health care needs. There is a hospital onsite for those needing acute medical attention. There is also a clinic where people come for basic health care needs and medications. The Physical Therapist, Annie (a volunteer from Germany) would educate patients on the importance of daily foot inspection for any injuries or skin issues. Leprosy, while mostly eradicated in the US – but not in Paraguay – is a highly contagious disease. It damages nerve endings and decreases blood flow (similar to diabetes) which can also delay or prevent healing. If patients with leprosy have a small foot wound, the patient will not feel pain. Patients walk on a small wound unknowingly for weeks until a severe foot wound develops. Often patients need surgeries, and have resulting misshapen feet, or even amputations. The prosthetist assists in creating custom made shoes, or new prosthetic limbs as needed.

There were and still are many young volunteers at the Leprosy Colony from the surrounding Mennonite Colonies (i.e. Fernheim, Loma Plata, Bergtal), as well as from abroad. I spent my time with the young volunteers rotating between the kitchen, laundry room and general cleaning. Many of the volunteers were German Mennonites speaking Low German. I had studied High German throughout college, but this was different than the Low German spoken here. The patients were often native Paraguayans speaking Spanish. There are also many Indigenous people in Paraguay speaking Guarani. I learned that Paraguay is a melting pot of cultures and languages, making communication challenging at times.

On one “field trip” I was able to travel with a doctor to the outlying villages. Here the doctor did follow up visits with patients who were unable to travel to the clinic. He even took lab samples to check for the status of various diseases right there in their homes. It was a mobile lab!

Despite my language barrier, I made friends and connections with other volunteers. On weekends off, I traveled by bus to Asunción to be with my friend Maria, and visit my Opa and Oma.

While adjusting to the language and cultural differences was challenging, this was a very rich four months away. This is one of the life experiences that helped to steer me into the path of Physical Therapy. 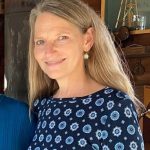 When not working as a PT in the NICU, Heidi spends her time reading, walking with family and friends, running, gardening or anything outside.