At the top of the Akron hill, and two blocks from the Mennonite Central Committee (MCC) headquarters, sits a white clapboard house I was brought home to as a baby and where my dad still lives. Dad worked at MCC during my entire childhood.  Akron is small, with a population of only about 4,000 people and has little industry or business, so MCC was very important not just to me and our family, but to the town and the people.  Dad would walk to work and back, coming home for lunch often.  We borrowed the MCC truck for weekend projects, filled up at the MCC fuel tank, and made copies on the MCC Xerox machine.  We played on the MCC swings, basketball court, and hit golf balls behind the office.  My best friend and neighbor Rich was an MCC kid, and Akron elementary school was peppered with kids whose parents had traveled or served overseas. Akron Mennonite Church had a deep connection with MCC and its mission of service.

My first paying jobs were at MCC – Dad would pay me a quarter to fill all the staplers in the office.  I’m sure it was just to occupy me while he tried to do some dictation or other work.  Later my brother Dean and I would empty all the wastebaskets and do some light custodial work.  At 15 I was mowing the lawns and painting MCC houses during the summer, working with Alfred, Sara Penner’s grandfather.   MCC was the backdrop for my childhood, and was the calling of my parents.  Called away from a Minnesota farm life after two years of alternative service.  Called away from both of their families, called to a life of service.  But definitely called.

I believe that sense of calling extended to the whole family.  We understood that Mom and Dad were dedicated to MCC and its mission of development and relief.  There were perks like growing up knowing Orie O. Miller, William T. Snyder, and Peter J. Dyck.  I visited the amazing basement of Edna Byler, full of exotic items from many countries, which grew into Ten Thousand Villages.  We shared many dinners with staff and “orientees” (Mom would occasionally complain we never got invited back because all our guests were heading out overseas!).  We grew up with a sense of the wider world, meeting volunteers heading off to do service in Latin America, Asia and Africa, talking about the poor and hungry of Haiti, Chad, and Appalachia, and helping with the MCC meat canner.  But I’m sure there were also sacrifices of which we weren’t even aware.

One family story of sacrifice features my brother Dean.  It was just days after my second Christmas, and Dad was heading off on another weeks-long trip.  To “draw us deeper into his work” and to “plant the seed of service in our hearts,” he told us about the children he would be visiting, and the poverty they faced.  We were asked to select one of the gifts we had just been given for Dad to give to a child.  Dean brought out a new yellow car that was later given to a nearly blind 8-year old boy who “clutched it to himself after playing with it on the hot dry ground of Haiti.”

Haiti still holds a special place for our family.  Dad has been to Haiti close to 50 times, and he has managed to get every one of his children and grandchildren to Haiti at least once.  I have visited Haiti multiple times, Dean and his wife served two years, my sister Kris for 8 years.  And we continue to be involved in Haiti through Kris’s strong ties to individuals and organizations there.

It’s hard to quantify the impact MCC had on my youth because I have no other childhood experience with which to compare, but it is clear that MCC and my dad’s role in it was and is part of the fabric of my life.  The example of calling played a role in my own choice of profession.  The themes of faith, service and volunteerism are woven deep and strong.  As I reflect on these themes, I pray I have done these values justice in my life as I strive to live the life of a (now grown up) MCC kid. 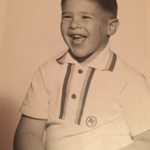 An MCC Kid... and husband, father, and pediatrician.