“It is in giving that we receive” – St Francis of Assisi

“They who lose their lives shall find them” – Jesus of Nazareth

While much of the MCC centenary celebration is focused on the untold millions who were the fortunate recipients of MCC, this article concentrates on the benefits that accrued to the MCC and it’s constituency.

In 1920 the North American Mennonite constituency consisted mostly of persons of Europeans ancestry. They were hard working, God-fearing people, living mostly in rural enclaves. Many were first or second generation immigrants. Their world was small and simple. On Sundays, these large families gathered in modest but functional church buildings where many still sang from German hymnals and were ministered to by devout but untrained preachers.

MCC was essentially in recess in the decade of the 1930s. It had neither a permanent staff nor a headquarters. The office moved from Scottdale, PA, to Akron, PA, in 1935 when Orie O. Miller was named Executive Secretary.

As the decade of the 30s was coming to a close, Mennonites began to feel threatened by war clouds in Europe that culminated in WW II. That was a watershed moment. To populate the armies needed to fight this two-front war, the Selective Service System was brought into being. It’s long arm reached into these rural communities and found draft age men who refused to participate in the military. They were assigned to camps strategically scattered across Canada and the United States in a program known as Civilian Public Service, administered by MCC.

The Mennonite map was redrawn. In the next decade the historic Mennonite “capitals,” like Mountain Lake, MN; Marion, SD; Meade, KS; as well as areas in Canada such as Coaldale, Alberta and Swift Current, Sask, etc, became hollowed-out. Concurrently, the urban option ushered in church plants in cities such as Indianapolis, IN; Topeka, KS; Denver, CO; Cincinnati, OH and New York City.

So it was that, completely unintended, but guided by God’s invisible hand, MCC participated in reshaping and modernizing the North American Anabaptist world.

Yet another unintended consequence of MCC’s sudden appearance was its role in inter Mennonite relationships. North American Mennonites have never been one homogeneous body. The Swiss migration began already in the late 1600s, followed 150 years later by an influx from Russia. Within Russia they came from many different villages. The Mountain Lake, MN, community, for example, came from more than 50 Russian villages. They eventually organized themselves into 9 semi independent congregations representing 3 conferences.

Both streams, upon arriving on these shores, were attracted to good land in the Midwest expanse, but there was little or no coordination between the two bodies. In some cases, they did not even know that the other existed.

In 1940 their quiet way of life was interrupted by the draft to man the Army to fight WW II. There was no provision to exempt conscientious objectors from participation in the military. The scattered Mennonite communities had no mechanism through which to make a united appeal. In a search for options, someone recalled that Central Committee through which they had helped their brothers and sisters suffering in Russia. So it was that through MCC, joined by the Quakers and the Church of the Brethren, the Civilian Public Service was brought into existence. Administered by MCC, more than 5,000 men served their alternate service through this program.

The miracle of MCC is that this scattered, diverse constituency became acquainted with each other while serving side-by-side in MCC in behalf of a needy world. It set the stage for more inter Mennonite activity to follow.

MCC’s role in educating its constituency

William T. Snyder, MCC’s longest serving Executive Secretary, was fond of saying, “MCC is not a check writing organization. Its first medium is not money; it is workers.” This philosophy made MCC programs lean on budget and rich in personnel. At its peak MCC had more than 550 workers on assignment, most of them drawn from its constituency. After serving 2-or 3-year terms, this stream of MCC alumni enriched the congregations to which they returned.

It is a partial answers to the question outsiders ask, “How is that a constituency so urbane has become so global in its reach and awareness?”

Thus it was that MCC service, along with other influences, played a major role in helping the historically insular North American Mennonite churches to make the transition to the 21st century, while adhering to its Anabaptist roots.

Ah yes, Jesus and St. Francis had it right. By sharing generously of treasure and talent, by opening itself to the needs of a hurting world, God has seen fit to use MCC to help the Mennonite Church reach out to a needy world while itself being born again. God be praised. 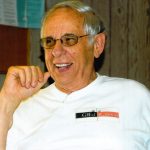 Edgar Stoesz, of Akron, PA, and his wife Gladys served with MCC 1954&nbsp-&nbsp1989 in six different administrative capacities, mostly from the MCC Akron, PA headquarters. He is the father of FMC member Randy Stoesz. (See Randy’s article as well!)