Service; that’s Mel’s legacy. Services of all kinds to FMC, to neighbors, with Mennonite Disaster Services, for Habitat for Humanity and to anyone who needed help. He did carpentry, cabinet building, painting, fixing anything that’s broken, maintenance of facilities or machinery, grounds keeping, snow removal, construction and construction supervision, locksmithing, and much more. Anywhere you look around FMC you see his handiwork. For example, the kiosk in the Fellowship Hall was a creation of Mel’s. He was a part of the crews that built the first FMC building as well as the current building and the 2009 addition.

Mel was born April 2, 1930, to an Amish family in southern Indiana near Montgomery. There would eventually be 14 children in the family, Mel is the third from the oldest. His father was a blacksmith who had a shop to repair buggies and harnesses as well as a hardware store that served the Amish community. Mel remembers his family performing services in the Amish community especially to families with newborn infants. The women would prepare meals and the men would do men’s chores as needed. “Just like we do today”, Mel states.

Along with two sisters Mel began attending the Mennonite church as a teenager. That’s where he met Mary Graber who would become his wife on October 11, 1952. In the summer of 1953, they moved to Indianapolis so Mel could complete his two-year Voluntary Service commitment at Methodist Hospital. Then he spent 23 years doing home construction before returning to Methodist Hospital where he directed the locksmithing crew until he retired in 1996. Mel and Mary have three children: Keith, Lynette and Sheila. Mel and Mary now live in Illinois.

“I praise the Lord for all the opportunities and abilities he gave me. Without Him I wouldn’t have been able to accomplish what I did. When we pair up with God there is a lot we can do.” One of his favorite Bible verses is “In all thy ways acknowledge Him and He will direct thy paths” Proverb 3:6. 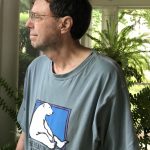 Ted Danielson is a retired psychiatrist and FMC attendee since 1974.