I was asked to write a reflection on service. It is proving one of my most difficult assignments. The more I think about it, the more questions arrive. Who is serving whom? Is the power differential poisoning the effort? Is this the right approach? Service in a church context vs service in a Christian context vs service in a secular context? Military service? Public service? My experiences of various service have raised these questions and more.

I once “served” on a church-based Appalachian housing project. A team of middle class mostly professionals from Indianapolis went to somewhere in the economically and educationally trampled Appalachian area and spent a week building and repairing houses. We had quite a bit interaction with local folks. We had a good time working in fair weather. It was kind of a lark. I wonder what the local folks thought and felt about the invasion of do gooders? There were many teams through there that summer.

Service often is pretty much like work in any organization. Sometimes we find ourselves working on a seriously flawed project or one with predictable bad outcomes – and we have to ask “What happens if I just walk away from this? Will that make it any better or worse?

Volunteering on Habitat projects, I found myself working on houses for people with disabilities in a setting where several such houses were clustered together creating a small disability ghetto in an impoverished section of the community. The right thing to do? Folks needed the housing. The Habitat organization was unwittingly exercising a kind power over those they were serving by creating a limited (probably unavoidable) choice of neighborhood.

Sometimes I find myself working with leadership that have the same flaws as we find in the everyday work environment, flaws that make the situation unpleasant and may have a negative effect on the project or the people served. Well, what did I expect? Sometimes I find myself questioning the motives of fellow volunteers. That is usually time for me to check my own.

A “service” project involved writing a solid grant proposal for a volunteer organization that insisted on presenting it to a funder who had rejected a previous proposal. The funder told them not to come back until they met certain conditions that the applicant refused to meet. The organization was a basically good one and we wrote a proposal that would serve well when they used it properly.

I will soon be involved in aiding a community of immigrant agricultural workers. I struggle with this. How do I show/live out my respect for them in this situation? I come into their community from across barriers of language and money. The food and clothing we bring are banners of those barriers. The situation unavoidably creates a social power dynamic with the “server” having greater power than the “served.” When I served in a kitchen for disadvantaged folks, I answered that question by simply saying to myself “They’re hungry. I fill the plate. They eat. We leave and get on with our lives. It is not great, but they are less hungry today.”

Maybe that is the approach I should take in Immokalee. If we deliver to the center quietly, leave the truckloads of goods and go, we will have done a service. It may be the best we can do this day. On the other hand, what if we get into extensive interactions with the folks we seek to serve? Do you see the paradox? How do we assure dignity for those served without assuming the power that cancels that dignity?

Which brings me to public service, civil, military, political. I have worked in civil and military service, finding no one who considered themselves servants. Most are just trying to do the best they can to go forward in life and make a living and see some good happen in the world where the work. They serve without obeisance but with hope for positive change in the face of great frustration. When people spoke to me of the good work I was doing in civil service, I always replied that I loved my work but could not do it if I did not get paid, always trying to maintain perspective.

I have written previously in MennoExpressions about military service. I only say here that throughout the history of the “civilized” world, the young and strong are conscripted (openly or subtly) to carry out war. The winning sides have momentary celebrations of the returning “heroes” followed by various means of making them disappear. Underneath it all I suspect we are subconsciously afraid of the people we have required to do our killing.

In political service there has always been the question of who is serving whom. Sometimes we like the answer. Sometimes not.

Finally, the most important service, personal. Here is where all the questions and ambiguities become most incarnate, most glorious and most painful. I have done personal care at different levels for both family and non-family. It takes so many forms that much of it goes unnoticed by the servant. You give someone a ride, kneel for a conversation with someone in a chair, run for the juice when the blood sugar drops, just sitting by, listening, leaving for work an hour early to drive a guy in an accessible van to his work, learning to clear a trach, changing adult diapers, cleaning up in the midst of another person’s embarrassment. You will find yourself doing it when you are both irritated, when you have already put in a full week, when you can’t quit because there is no one else to do it.

Our church in Florida has a next-door neighbor who hated the church and spoke out against any effort to modify, expand or otherwise enhance the place. When he fell last year and began to use a wheelchair, our folks built a ramp for his front entrance. When I told John Hofstetter about this he replied “Oh, Mennonite revenge.” If you can still find a copy, I recommend the movie MY LEFT FOOT. It is a real-life story of a person with a major physical disability who is also obnoxious in various ways and hard to deal with. I am trying to say personal service is often HARD.

I have often found myself confused when attempting to be of service to others. When I was younger I usually did not realize when I was serving myself more than the one served, when the service was more about me feeling good or when my ego initiated a service that was not requested and may not have been wanted. Now I do what comes to be done, try to be respectful and carry the questions, live with ambiguity and paradox. 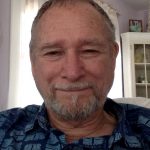 Paul Shankland is 76 years old, not a genetic Mennonite, member of FMC since early '90s retired from Indiana Governor's Council for People with Disabilities, married to Deborah Rees