Our friendship was cemented more than four decades ago with very frequent interaction; not with emails or phone calls since they moved to Wakarusa. Still, I usually sent him an email on his birthday and he always responded by saying something like:

“It is appreciated, especially coming from an old man like you.”

The Glicks came to Indy in 1972, and we formed a special bond since Mel and I were both chemists at IU, and we were both elected elders at FMC at about the same time. Not only that, but we both had three children of about the same age, and we soon formed a small church group with Amelia Miller and Clarence and Beulah Cobb. We spent so much fun time together, especially going to the Cobb farm in Kokomo where we went to eat, to butcher a pig, to harvest grapes, make wine (not Mel’s favorite), or just to hang out, and on and on.

While butchering Mel had so much fun offering the pig snout to Amelia who detested it and ran away; and we all marveled at the sudden transformation of two girls of our families who the day of butchering became staunch vegetarians.

We took numerous excursions; for example, to PA to see Mel and Sherrill’s home environment (as we drove around Amish country and came into Intercourse, PA, Mel pointed to the post office and said that tourists like to stop there, and send a card to their friends saying: “We stopped in the middle of Intercourse to send you this card.”) We went to Kalona, Iowa, to get to know Amelia’s Amish family, to Paraguay to see my former stomping ground, and Mel organized a group bike trip from Indy to the Cobb’s in Kokomo.

We also went to Colorado with some of our children to climb a few of the fourteener peaks. We were inexperienced and Mel and I encouraged everyone to hike over to the next mountain, not knowing the deceivingly vast distance between peaks. We soon gave up, and Milton suggested we both take a geography class. We had invited Dick Yoder to come along for our Colorado hike, but suddenly, he slipped and skidded down a long, steep embankment, narrowly missing a huge boulder before coming to a stop. We were all crying out of fear of what could have happened, and out of joy that nothing serious happened. Wiping away tears, Mel gathered us in a group circle and said a most fervent prayer of thanksgiving.

We had plans, well, pie in the sky ideas (Mark called them crazy ideas). We were planning to get a round barn and build an Essenhaus/church/storefront in Indy. At other times we talked about how we could help Mennonite colleges, without resigning our current positions but still help. We came up with the idea of encouraging Mennonites in higher education to use their Sabbaticals to volunteer at Mennonite colleges. Well, we never did that either.

Right after the creation of MennoExpressions in the late ‘80s, Mel and I went to his office to transform the rough draft into a publishable document.

I admired Mel’s wonderful ability to talk in public – he didn’t just talk, he always said something memorable. I admired his gentle, soothing voice, and his smiling face; he always had great ideas for social events. I never heard him use harsh word, but instead he saw the positive in all situations, and noted the good in all humans. The harshest thing I ever heard was when he spoke of one of his children’s actions as being “a pain in the asphalt.” I admired that and laughed at the same time.

Mel sometimes had surprising comments, like when he expressed his wish to give all his money to charity so he could die broke. I was surprised by his offer to our small group to do devotions every time since no one else was eager to do so. Mel knew the Bible better than anyone else. And I do remember one of his devotions when he asked us all to write down the names of five persons who have influenced our life in a special way. Then he asked us to mark those persons on our list still living, finally he asked us to contact those still living persons and thank them for what they have done in our life. I did that and found it very memorable indeed!

Once FMC had invited a guest speaker whom we knew only from his excellent writings. While he was a good writer, turns out he was an awful speaker. Mel sat next to me during that agonizing speech performance, and after a while he turned to me and said, “If I ever do that, would you just shoot me.”

In his later years Mel discovered woodworking as his hobby. He was passionate about it–reading books, getting tools and equipment, going to club meetings, becoming a member of a woodworker’s association, even making plans to tour the country and stop at woodworking centers. Many people benefitted from Mel’s hobby by getting bowls he had turned, wooden pencils he made, or a tricky and seemingly impossible nickel in a cube of wood with six holes too small for the nickel – yet the nickel was inside. To him it was a friendly competition to see who could turn a bowl with the thinnest wall. He even made a bowl so thin it can be used as a translucent lamp shade.

Mel wanted me to get into woodturning, and even took me to a meeting, and into his shop to turn a simple bowl. As the block of wood turned, and I slowly moved the chisel closer to the turning wood, he placed his hand on top of mine and I (read we) turned the bowl. It is rough, thick and ugly, but “I” made it. The wooden box made by Mel on display at FMC

Mel also made the wooden box now displayed in the fellowship hall at FMC, Indy. It is made from many pieces of wood contributed by members of FMC; it is to be opened on the congregation’s* 75th anniversary, June 1, 2028, to reveal its contents.

While we are all sad to lose Mel here, God is ecstatic his servant has joined him in heaven, where, I am sure, he will organize amazing adventures.

Sherrill, Mark, Starla, and Milton, blessings to you and your families in this time of sorrow. 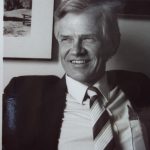 Erv is in his chemistry office virtually every day (using banker’s hours) doing a newsletter for the department, encouraging faculty, and he has been able to publish five chemistry articles within the last year+. “Though I knew it was coming, retirement was a big transition. But now I am happily busy.”