Who was Steven McLay? He was a member of the HSLC (Holy Spirit Led Church) which meets in our building several times a week. Steven cleaned our FMC building for several years. While he worked part-time as custodian, he took two buses to come clean and two buses to return home. He took great pride in his work. We grieve the loss of Steven, who passed away on June 11, 2020, after suffering a stroke. Below are reflections from some FMC members.

By Allen Mast
Whenever I was at FMC and Steven came in, he would always say hi and ask if there was anything he could do for me. One time I had a trash bag going to the dumpster, and he almost demanded that I leave it, insisting he would take it with the other bags later.

By Emilie Walson
I found it very interesting to get to know Steven McLay during his tenure as custodian at FMC. Steven was excited to get the job and did a good job for the church. I enjoyed getting to hear stories about his special feline pets–they were his pride and joy. We nicknamed him Flash because he moved and talked so fast. There were several occasions when Steven joined our staff lunches. This was a time for getting to know Steven better, and I am glad we had those opportunities. We were sorry to see Steven step down and leave FMC. By Robin Helmuth
Steven had a broad smile, the widest kind, even though he had few teeth. I never saw Steven when he wasn’t smiling. He always, always, always asked how I was doing and how my family was doing. He was afflicted physically by gastritis and later lymphoma. Steven always put his arm over my shoulder or on my upper back, his way of letting me know he cared about me. I made it a point to thank him for his custodial services at FMC, and he was quick to respond he really liked being part of the staff. There were occasions I regretted not taking more time to learn about Steven and understand his life story more. Steven would nearly always look for me when he saw my Mazda in the parking lot. Yes, Steven’s witness as a loving, smiling, caring child of God will be missed.

By Gaynel Bryan
Steven seemed to be a self-sufficient man. Often very happy, he was totally focused on doing a good job. On the personal side, the loves of his life were his cats. To the end, he would cheerfully share photos of them. I would often share my lunch with him because he would always come through the offices around lunch time and say, “Are you eating again?” It was a joke between us. One of the things I kept trying to impress on him was to slow down when he talked. He would speak a mile-a-minute, and I just couldn’t understand a word he was saying. I’d have to ask him to repeat what he just said, but slower, please. He would laugh and try his best to speak slower. It was a sad day for me when he stopped working here. I will miss his blaring speaker playing hymns while he cleaned, and his coming through the office to pick up trash right at lunch time, and his visits to show and tell me about his little fur babies. I will miss him. 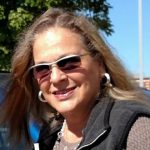 Gaynel was born in Michigan, raised in Mexico, went to school in Texas, lives now in Indianapolis, and works part-time at FMC. She was an Instructional Designer and E-Developer for Sallie Mae for 13 years. Her son and his family are missionaries for Christ in Mexico. She has 3 grandsons. She travels whenever possible.