It’s been a quiet week in Wakarusa, Indiana, my parent’s hometown out there on the edge of Elkhart County. School’s been in session for a couple of weeks already because in Indiana they don’t wait for Labor Day to start educating their children. Although it was still August, there was a hint of late September in the air, and anyone who went outside around dawn knew instantly that in a few more days summer would be over, and the cold wind would blow across Lake Michigan and the newly harvested fields.

Over at the Glick house, Mel would have loved the weather this week, each morning, with the chimney swifts and barn swallows darting all over his backyard and over the pond, gorging on their insect banquet and dive twisting over his rock formations.

Mel would have loved the weather this week, with the house situated just so to see the sunsets over the pond and over the Wakarusa Wastewater Treatment Facility, which looks fine from a distance and much better than it sounds.

Oh, the sunsets this week, that were blue, then yellow, then orange and red, then magenta, purple and black.

Mel would have loved the weather because he liked transition days, near and far from the actual change of the season, and he might have exclaimed to a neighbor, or to his children, or to his wife, or to his grandchildren in a text, or to a friend at church or a stranger at the store, “Have you seen the sky today? What a beautiful sky!” Because it didn’t matter if it was summer or winter, whether the fields were planted or plowed or covered with snow, to Mel the signs of a new season, even months away, or a sunset, were harbingers of something else, signs that God loves us, and something to remark upon, even if it had happened every season for his almost 80 years and even if the sun rose and set every day for his 29,000 days.

Mel would have loved seeing the people who were thinking of him this week as well. They gathered at his home there on the changing sunset pond, at the funeral home in downtown Wakarusa, at the Holdeman Mennonite Church, at the hotels in Elkhart across from Hubbard Hill where he lived for a sliver of his life, in their homes with their families when they learned that he had passed away. Some people came from Michigan, from Alabama, from California, from Pennsylvania, from Virginia, from Ohio, from Delaware, from Maryland, from Arizona, from Indianapolis, because they liked Mel, they appreciated something that Mel had done or said or given to them, they were family, they were friends with his wife, with his children, with his grandchildren.

Mel would have loved seeing all the people because they were reconnecting with each other, sometimes after many years, using his funeral as the reason to drive all day, to fly across the country, to wait hours in line, to change their schedule, to be with each other and tell stories. If Mel was there he would have walked around the groups of people who gathered and found someone who needed to talk about something important in their life, would have asked each of his grandchildren how they were doing, would have found a small child to give an interesting rock or a piece of candy.

And the days were beautiful this week, with skies that turned orange and red.

The thing was, almost all the photos were taken in the last 15 years since the existence of the camera phone; those are the photos that modern folks can access. You might have gotten the impression then that Mel was always a grandfather and a woodworker and a rock hound and a sunset watcher, and you might have been right, in a way, because he always loved playing with children and collecting wood and rocks and remarking about sunsets.

But the photos that weren’t shown, the photos from years before camera phones that are buried in 35-mm slides and photo albums, would have shown

a little boy, the first child of Mahlon and Ruth Glick, on a farm in Pennsylvania, playing with his little brother and little sister

a conscientious objector, newlywed, sent to the frozen thumb of Pigeon, Michigan for alternative service

a young father, a med tech, a masters and PhD student struggling to pay bills and buy food and raise a family in Birmingham, Alabama

a 33-year-old in Indianapolis starting his first professional job

a church leader, a youth group sponsor, a clinical laboratory supervisor, a professor at the IU School of Medicine, a world traveler, a frequent hospital patient, a bicyclist, a runner, a skier, a landscaper, a woodworker, a counselor, a grandfather, a Sunday School teacher, a rock hound.

And what you wouldn’t have seen even in the earlier photos is Mel exclaiming, “Look at that sky!” and “I see a rock we should take home!” and “Look at the grain in this piece of wood” and saying multiple times to his son, “I want you to know that I admire the way you and Marci are raising your children.”

Over at Grandma’s Pantry, business isn’t going to be as good now that Mel Glick won’t be stopping in multiple times a day just because Sherrill mentioned that they might need something. She learned that she needed to bundle her comments like that because Mel would be out the door so quickly for the first item before she got to the end of her list and then he would have to go again. He didn’t mind.

And Mel won’t make any more cinnamon-sugar dried apples or soft pretzels, and he won’t teach any more Sunday School, but his children and his grandchildren will remember him and tell their spouses stories and tell their children stories, and even when the stories are forgotten, their children’s children will still be affected in small but enduring ways because he was part of God’s plan and that’s how people show each other what they know about that plan and how to live.

Over at the Olive East Cemetery, a plot was ready for Mel. It was situated so that if he would have been sitting there looking at the sky, he could have seen the sun go down that night, magenta, purple, then black.

And that’s the news from Wakarusa, where all the sunsets are spectacular, the field rocks can be split into colorful gemstones, and the grandchildren are above average. 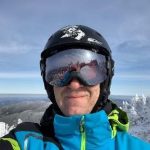 Mark is the son of Melvin Glick. He currently lives in NYC with his wife, Marci, where he bikes to work at a Manhattan biotech (after retiring from Eli Lilly). Mark and Marci attended First Mennonite and Shalom Mennonite churches when they lived in Indianapolis.”