The past couple of years have been all about processes and journeys. The new hymnal Voices Together had a journey all its own. From the beginning, the committee that put the hymnal together invested a lot of time on the process. I, myself, have also had an adventure in getting acquainted with the hymnal and its resources. This is part of that journey.

In 2008, the discussions started around creating a new hymnal. Hymnal: A Worship Book was starting to show its age. A committee was formed, and the group started the process of building a new hymnal. Their first step was to ask music directors and leaders from Mennonite churches in both the US and Canada to complete a survey sharing their favorite songs from Hymnal: A Worship Book, Sing the Journey and Sing the Story. The committee traveled to many churches throughout the US and Canada, including urban and rural congregations. These trips also included visits to churches where members are part of “non-traditional Mennonite” ethnic groups so they could learn about songs these groups were using in their worship services. There was also a HUGE fundraising campaign initiated to raise the money to publish this new book. Finally in the fall of 2020, 28 years after Hymnal: A Worship Book came out, Voices Together was published.

My personal experience with the new hymnal began in January 2019 with my first trip to the Music and Worship Leaders Retreat at the Laurelville Retreat Center in Pennsylvania. At the gathering, we were given a booklet containing some of the songs that were being considered for the new hymnal. For 40 hours, (minus the time for sleeping and eating) we were singing the new songs and looking at some of the resources that would be included in the new hymnal. I was in HEAVEN!! Singing with all those people and learning many new songs—it was food for my soul. At the retreat, we also learned that many of the songs we have grown up with or learned to love, had been slightly changed to make them more inclusive. There were songs from many different cultures and languages. It turns out that the new hymnal has almost 200 songs in 50 non-English languages, ranging from American Sign Language to Zulu. There are also contemporary Christian songs.

The next year, January 2020, I went to the retreat again. As before, we were introduced to many new songs and worship resources. The committee had worked very hard to make this hymnal useful in a variety of situations for anyone, whether pastor or layperson, to find prayers, songs, and readings. We were also given ideas on ways to use the songs in worship. One resounding theme was the inclusion of songs from Anabaptist and women artists. We learned about the amount of time the committee spent reviewing music and words, getting copyrights, changing texts (if allowed), and debating what should finally be in the hymnal. It was obvious that a lot of thought and work went into the creation of this worship resource.

Then the pandemic hit!

Production was slowed and Voices Together, that was supposed to be released in the Fall of 2020, was pushed back to January of 2021.

In the meantime, I found out the hymnal was available through an app. I couldn’t wait to see everything that was included. After downloading it on my tablet, I spent a lot of time scrolling through the songs, looking for old favorites and starting to play through the new ones. I also purchased the recordings of 70 of the over 800 songs included in the hymnal. The songs were recorded by several different groups, Calvin Community Church, Hesston College Bel Canto Singers, Eastern Mennonite University Chamber Singers, Menno Singers, and the Camps with Meaning Ensembles. I fell in love with many of these songs and have used them in the services at FMC (I sometimes forget that you all don’t know them!) Many of them spoke to me in different ways. I also took a course through AMBS that introduced new songs, then gave participants a chance to talk about them, work through how to incorporate the songs and introduce the hymnal and its resources to the congregation.

I found songs that quickly became some of my new favorites, including VT 802, “Draw the Circle,” VT 582, “My Love Colors Outside the Lines,” VT 6, “Let’s Walk Together,” VT 42, “Could It Be That God is Singing,” VT 9, “Come Away from Rush and Hurry,” and VT 299, “God Lights a Lamp,” written by two of the presenters at the Laurelville retreat. There are so many I cannot name them all.

Soon after the hymnal came out, my dad ended up in the hospital and passed away. The new hymnal has several songs that have been helping me through this loss. They are songs that I find I cannot sing, but listening to them helps with the pain and sorrow. VT 653, “Nothing is Lost on the Breath of God” is one of these songs, which many of you know, as we have used it many times at FMC. The most significant song that has been added to my playlist is VT 612, “When Pain or Sorrow/Hold On”. This song was written by Anabaptist artist Adam Tice. At the Laurelville retreat, he told the story of a family member and the pain that follows when persons take their own life. When we sang this song, there was not a dry eye in the house. It is on the recordings from the hymnal, and the words speak of confusion, doubt, great sorrow, and yet the peace and feelings of support that can come from my church family. All these songs remind me that we have a God who loves us. We are a church together, and we help each other—whether it is in what we say or what we sing. Sometimes songs can say what is difficult to express only in words.

I thank you all for your patience and your willingness to try new songs as we travel on this journey of learning the new hymnal. I hope you have found at least one or two songs that you have grown to like, if not love. And the journey continues… 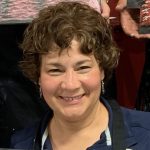 Jana is enjoying a new season in her life since retiring from teaching music full-time in Decatur Township schools. She has been the music director at FMC since 2019.