Tema Okun, along with Kenneth Jones, are two individuals who have paved the way for us to understand the term “White Supremacy Culture” as it is presently used. This is also the name of a book by Okun. It’s a term that often leads to defensiveness among individuals of European heritage, i.e. “I’m not a white supremacist!” But it’s one that we, whatever the hue of our skin color, could learn much from, even if we bristle at it.

No – we are not Neo-Nazis; however, most of us grew up in a culture predominantly influenced by white people in power. It’s just a fact. These systems that were created with patterns and processes common in white culture also benefited the people who created those systems…white people. You are not a white supremacist just because you grew up in that culture. But if you are white, you have benefited from the system, because that is how it was designed—to make “us” comfortable.

Corporations, non-profit boards, schools and churches have all been influenced by white supremacy culture. The way we run meetings, the things we value in group work, the focus of the work—all are influenced by our experiences and training in white culture, whatever the ratio of melanin in our skin. Not all of that is bad, but when we don’t look at the pieces of that culture that can marginalize BIPOC (Black, Indigenous and People of Color) individuals and shut down their voices, we are continuing the negative pieces of the pattern.

So, what does white supremacy culture look like in an organization? Those, like Okun and Jones, who have studied this topic, have a list of traits that are common. Let me name a few that I have perpetrated, thinking I was just being a good leader: Urgency, Perfectionism, Either/Or thinking, Patronizing, Individualism valued over Group, and Avoidance of Discord.

These are just some of the ways I have participated in white supremacy culture. They support each other. For instance, I can’t hear your pain or your thought because the meeting is nearly over. Or if I truly consider your idea, it might derail my idea that is the BEST… etc. Sometimes the culture is very subtle, sometimes it’s overt.

In the past four years I’ve taken a closer look at myself and at my patterns. I’ve tried to adjust how I lead or participate with an awareness of these and other aspects of my white culture. I become defensive, feel shamed, self chastise, then consider, ponder and try again. I make constant mistakes. Unlearning is a lot harder than learning. Unlearning doesn’t mean throwing out all my learned behaviors, but it does demand that I consider carefully whether what I’m valuing in my actions has genuine merit.

Our country is at yet another crossroads in understanding its history. This one is big. Many of you are on a deeper journey into recognition and ownership of the privilege that has been given to some over others during the creation of this country, and the effects that continue today. Some of you are reading like never before; others are joining SURJ (Showing Up for Racial Justice) groups; some are marching in support of Black Lives Matter. Some of you have joined Alicia Amazan online to tackle difficult subjects in regards to racism. Some of you are educating your children more earnestly about privilege and history.

It’s a big undertaking, and we are ALL late to the table. Until we understand how we participate in perpetuating racism, it’s hard to take needed action to change things. It’s difficult work, and it really has no end, but the results have the potential to enrich all of us.

SURJ developed a learning curriculum which has involved a number of FMC individuals. The goal is to help white people develop an understanding of what we’ve perhaps missed in our formal education regarding race in the US, and also the things that hold us back from understanding what BIPOC persons deal with on a daily basis.  Another FMC group is being planned for the fall. Here is a link for the SURJ national website.

A short piece by Tema Okun with a concise explanation and examples of White Supremacy Culture:

An article on racism in white church bodies.

Alicia Amazan: Upon seeing people interested in learning and talking about racial injustice, my friend Chelsea and I sent out a call to have people join us on the journey. We wanted to provide a space to hold each other accountable, to keep learning when the media coverage loses momentum and we can slip back into the privilege of not seeing the injustices. We are passionate about learning and listening to Black, Indigenous, People of Color (BIPOC) and are intentional about pointing others to these voices that are speaking out and doing incredible work to create a more anti-racist society. We also acknowledge that as white people we need to teach each other and not rely on BIPOC to teach us, as that is not their job. Chelsea and I are providing space for people to relearn history, identify and learn about whiteness and systemic racism and work toward being anti-racist. We have over 100 people joining us from across the country in a variety of ways. Below are ways people can be involved.

What is offered at Continue to Learn and Listen?

Join us by subscribing at http://eepurl.com/g59Bvn or emailing us at email hidden; JavaScript is required. 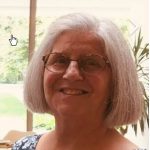 Mary has been spending COVID time doing more crosswords than ever before, cutting lots of fruits and vegetables, making efforts at a porch garden, and observing nature.

“I let my quest for understanding racial inequality slip the past few years. I know that in itself is a sign of privilege... being ABLE to ignore or put the issue out of my mind.”